Some projects are just more challenging than others and the Woolton Manor development project proved to be one of them. The site proposed for development is  the historical formal gardens belonging to the former Woolton Manor convalescent home, which had become overgrown through years of neglect. As part of the development, a small number of houses sensitively located within the neglected gardens would pave the way for opportunistic and sensitive restoration of the remainder of the site. To add to complications however, the site was in the process of becoming part of a larger Local Wildlife Site owing to its bird interest and butterfly assemblage. However, the citation document being used to inform the proposal acknowledged that the data was out of date and more up to date surveys were required to confirm that the guidelines could be met. A whole suite of surveys ensued to update the information, but the site was found to have lower than expected biodiversity value, although it has to be borne in mind that actual development area (survey area) forms only proportion of the proposed designation area. However, the surveys added much value in identifying the most sensitive parts of the site, which facilitated the creation of a detailed landscape design targeting the species identified as being most at risk.

The development will command 2 hectares of the site (5.5% of the proposed Local Wildlife Site) with the remaining 3 hectares (8% of the proposed Local Wildlife Site) promoting conservation. Enhanced management targeted birds and butterflies for which the Local Wildlife Site is to be designated for, to ensure that the qualifying features remain after development. This includes new areas of enhanced planting and management of scrub and trees to improve the structure for birds, ensuring a greater diversity of species through improved layering of the woodland.  Butterflies are catered for by enhancing grassland areas and bringing them into rotational management with varying sward heights, particularly along pathways where glade habitats are important offering warm sheltered spots for feeding and roosting at night. A major change for the site is the inclusion of a new pond, which all of the species on site will benefit from, including foraging bats. Static and automated surveys for bats identified the need for additional roosting opportunities, which has been addressed by re-building the former convalescent shelter and also by creating a new contemporary shelter, which have both been designed specifically with bats and wildlife generally in mind. Bat and bird boxes are incorporated within all the new properties. It is considered that the site post development will be a rich haven for wildlife locally and most importantly, the development will demonstrate that the built environment can actually enhance wildlife areas if sensitively designed through targeted species surveys. 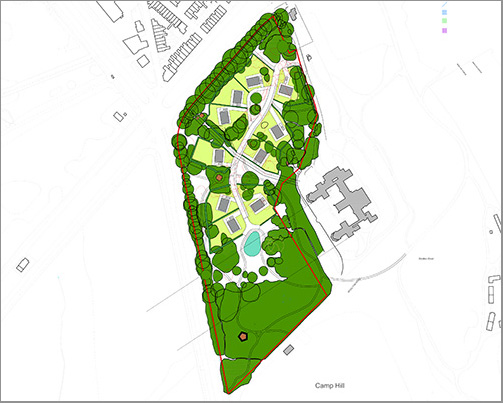