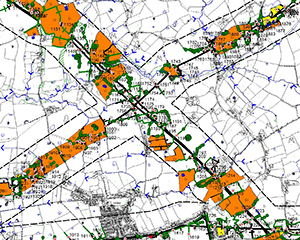 One of our Flagship projects was commissioned in 2006 for United Utilities Plc and involved undertaking an extended phase 1 habitat survey and other ecological surveys for two pipelines; the Hodder and Lcus Aqueduct, located within the Ribble Valley in Lancashire. The survey area encompassed two linear stretches of countryside which spanned approximately 100km from Kirkham to Stocks Reservoir and from Franklaw Waste Water Treatment Works (WwTw) Garstang to Houghton Service Reservoir.

The extended phase 1 habitat surveys were completed within a single season with several expert Ecologists working on the project.

We used Mapinfo as the mapping tool of choice to record habitats and signs of protected species along the pipelines. The report evaluated habitats and species, and assessments were made of ecologically significant areas/species with recommendations subsequently being made.

Walkover surveys were also undertaken in early spring 2006 to locate all waterbodies within 250m of the pipelines. A total of 550 ponds were found which required newt surveys. All hands on deck and all of the 550 ponds were surveyed in spring 2006, by expert licensed amphibian ecologists. These surveys located where great crested newts were present and in what areas European Protected Species development licenses were required.

Other works undertaken for this project include detailed surveys of the River Hodder including otter and water vole, badger survey and assessments of trees containing the potential for roosting bats. We have designed detailed habitat restoration schemes for Biological Heritage Sites (BHS) and sites of ecological interest and are currently supervising works in sensitive areas.

Surveys ahead of the project

Surveys were completed in advance of the project commencing to advise the design proposals to United Utilities Plc and inform their decisions, methods and mitigation in relation to the ecological value of the area. Ecology Services Limited was a Framework consultant and undertook a wide range of services including National Vegetation Classification (NVC) surveys, protected species surveys and mitigation works (bat, newt, water vole, otter and bird) as well as environmental assessments including method statements for habitat restoration within protected sites.